Thanks to Merl Fluin for posting about the waterlogged Chimaera #4, which of course made apparent that we hadn’t posted about it ourselves…and especially for getting such wickedly posed shots of the issue. Check them out here on the Gorgon in Furs blog (and then, if you aren’t familiar with the page, keep going because there are plenty of other wonders to be found…)

This issue had been growing from the initial game, played during the Ottawa flood of 2017, and then bolstered over the last few years with more flood dreams, games, and a follow-up report to another flood here in 2019.

Copies available upon request, with fair warning of possible spillage, at: chimera.ipa [at] gmail [dot] com

We who seek charms to push back against necrosis of thought say “no aeronauts without windshield wipers in this house! It’s unsanitary.”

Still, we reap our rewards at the end of a hard day’s treading water.

Old friends encountered bolster us with comments in sensible prose.

And so, we separate mirror language from anamorphist reduplication and aim instead for a productive redoubling in the realm of rock-pairing.

-From the journals of Klaus Kostenbauer, spontaneous overseer and fragment-theoretician of recreational greenspace along the Rideau River.

Collaboration in isolation by JA and PP

As old as tomorrow… With untold floors of FRESH exciting MERCHANDISE, exquisite fixturing, a large, easy-to-use PARKADE OF THE DAMNED and a fine staff of ATTENTIVE SALES ENTITIES… It’s OLD MALL! This volume presents the results of parallel surrealist expeditions to “old malls” in two North American cities. Undertaken in early 2020, these “gothic” experiences foreshadowed the closure of commercial zones throughout the world by a matter of weeks. Specials include:

And much more! Save or be saved at OLD MALL

Tonight I was searching a video streaming site for something totally different when the giallo film The Perfume of the Lady in Black by Francesco Barilli came up in my results. Having just seen this recommendation from fellow surrealist DC online, I took the opportunity to watch it. One striking coincidence occurred. The film has a scene which features a music box containing a ballerina figurine, presented to the main character, Silvia, by an Alice-like incarnation of her childhood self. Silvia recognizes the figurine as one from her childhood because of its missing arm. The thing is… I had seen and photographed this exact ballerina figure in Ottawa. It was EXACTLY the same as one I had taken a photo of a while back while browsing a junk store. How exact? Not only the same make—the same arm is missing.

We are pleased to announce that we have just hatched a a new little book of surrealist games, inquiries and other oddities with Peculiar Mormyrid Press

You can order the print version here: https://www.lulu.com/en/ca/shop/ottawa-surrealist-group/the-object-beautician-and-other-terrors/paperback/product-1gqddgjg.html

And here is a free PDF version:
https://peculiarmormyrid.com/wp-content/uploads/2020/02/Ottawa_1.pdf

Many thanks to Steven Cline at Peculiar Mormyrid Press for helping us get this in shape.

The canal has extended its feelers into pleasant nighttime excursions which are really quite dark and not very well-lit at all. The atmosphere can shift dramatically and the passage in facing certain maudlin streetlamps gave birth to an appendage, a “subjectivity” of a most evil looking sort, a kind of shadowy figure who sings snatches of incomprehensible tunes to itself as it sharpens something very dangerous. We call it the nightprowler. Over the canal it has total jurisdiction. Past Pretoria Bridge, on the east side, where it is especially dark, it makes plans. Recording the crunching sounds of footsteps in the underpass.

During the day, in certain parts of the canal, the green hue of the seaweed and the algae and whatever else is down there tend to evoke strange jungle landscapes. Analogical green. At the theoretical level: surrealism as interruption, surrealism and the lost art of “lodging a complaint”, beyond observation and into reportage. The implications of a weird and untimely hypnagogic review of “Smells Like Teen Spirit” in a way that nobody we know would ever do it. The possibility of criticism from elsewhere.

On a hot afternoon, a local theatre played an old black and white film. A handful of people were watching it, clustered mostly in the centre of the theatre.  In this otherwise typical thriller movie there was a very effective seance scene. The rhythm was slow, the patience of the director made a lot of sense, so the mood was perfect. Don’t we have every reason to believe that, in such a scenario, the sporadic audience is participating as much as those gathered around the table? And in that split second where expectation holds its breath and something “happens”, it would be a good chance to photograph the inside of our brains for posterity.

Bunuel, Jean Rollin…The idea of riots in the cinema. A temptation to ask people if they have ever seen such a legendary occurrence.

A lithograph of Matta’s “Les Voix” (#2/40) was found for sale at the antiques market. At 1200$, we wonder who will buy it. It is a charming comic strip of yellow and blue mania, and would sit very badly above the mantlepiece of many a Kanata home. Next to it were some very banal landscapes, and a few dolls and toys, which seems like a nice way to present images that are important to surrealism. It is an effective interruption of the standard bits and bobs you see floating around (and you can see some responses to a 2018 inquiry recently published on that very subject).  A small statue of an Egyptian deity with an elongated, perhaps crocodilian head continues to remain unsold in a locked glass cabinet perpendicularly facing the Matta print. There is also an old baby pram within which a violin and guitar are nestled together taking a nap and dreaming unheard of concerts.

What are we all doing? Why don’t we jump off the peace tower?

L had some very vivid dreams involving JA partaking in surrealist activities, including a very striking oneiric collaboration on some tombstones for pets. AC on the contrary reports dreams that are more apocalyptic in nature.

In Templar Solstice Park, known for its overall nationalist banality, music. But not the normal music you’d expect to hear from the nearby bar. This is 1920s tango, straight out of a Bunuel film. Yes, it is even crackly. What? Are these strange people really dancing to this, on a  black platform, sweltering day? It induces a lot of strangely loving feelings. There are still nice surprises. Not long after, a mayfly molted on someone’s leg and left its old skin in a very pretty position on his knee. Did we mention that When Rabbit Howls was being read?

On the street, overhead: “I always get the last laugh”.

An image struck, too, of the interminable summer, from a randomly opened children’s book. Four glasses of lemonade. Each one has a straw that loops, and loops, and spins, like an insane labyrinth, making almost letters, almost faces, interweaving and disconcerting. A maze for refreshment. An athanor, or anathanor? Bubbling. Is there really only one right choice for the perverted clinamen of libido? “This is not my idea of a good time; this is not my idea…” 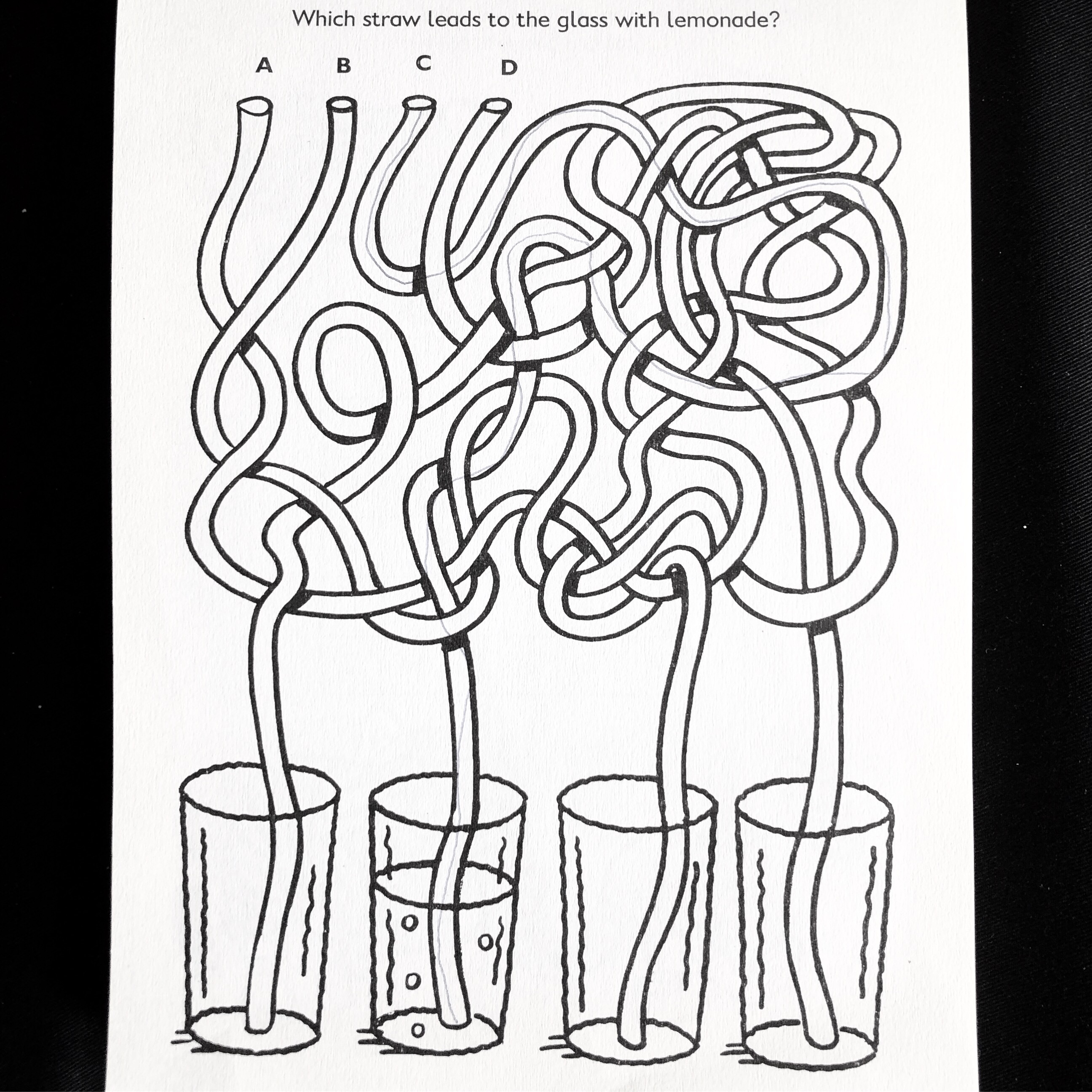 “Did you know that the Creator was drunk? Have pity on that lip, soiled in the cups of debauch.” 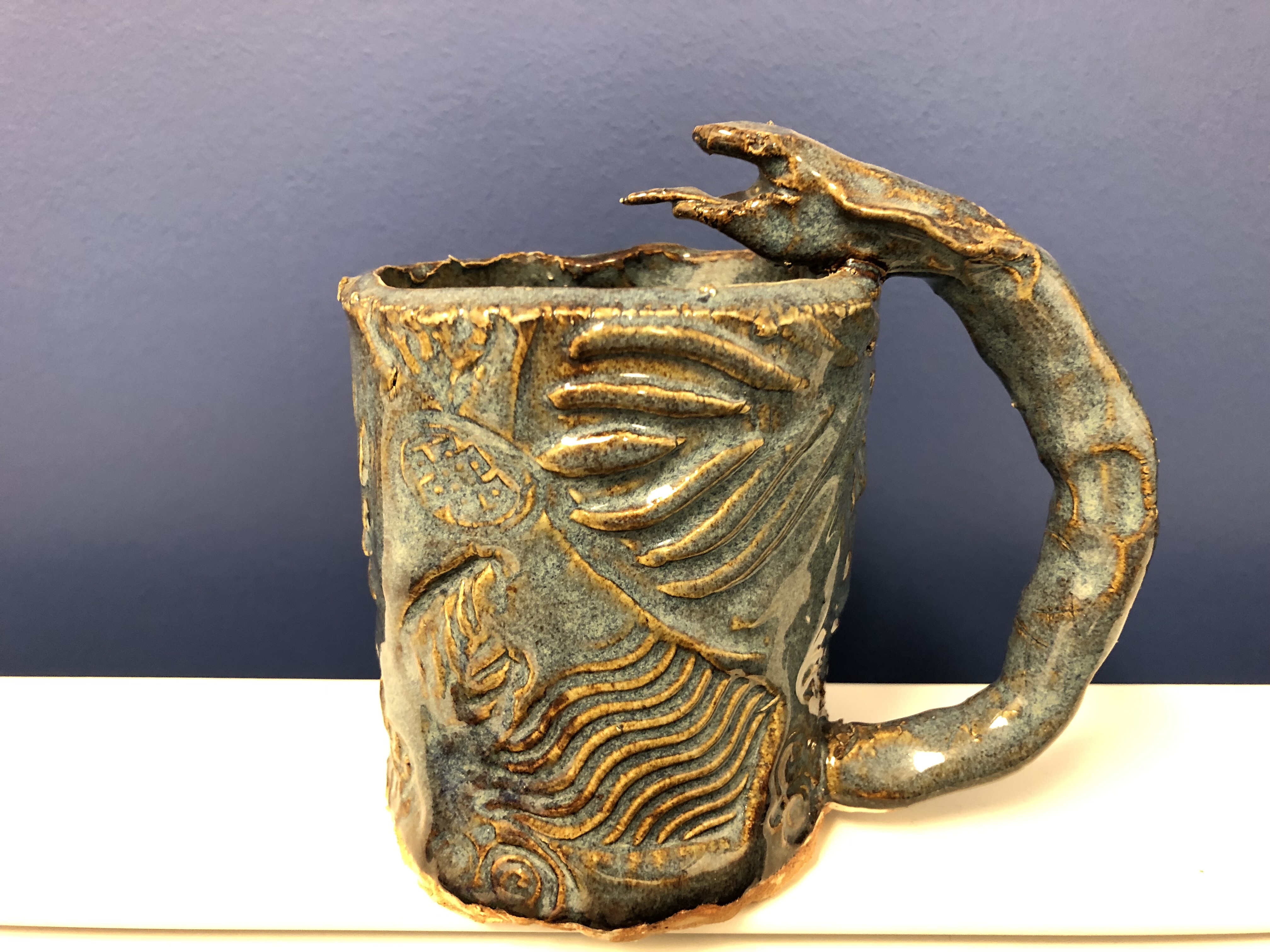 Found at a junk shop on Lautréamont’s birthday, April 4th, 2019.

for chicken fat, against leanness 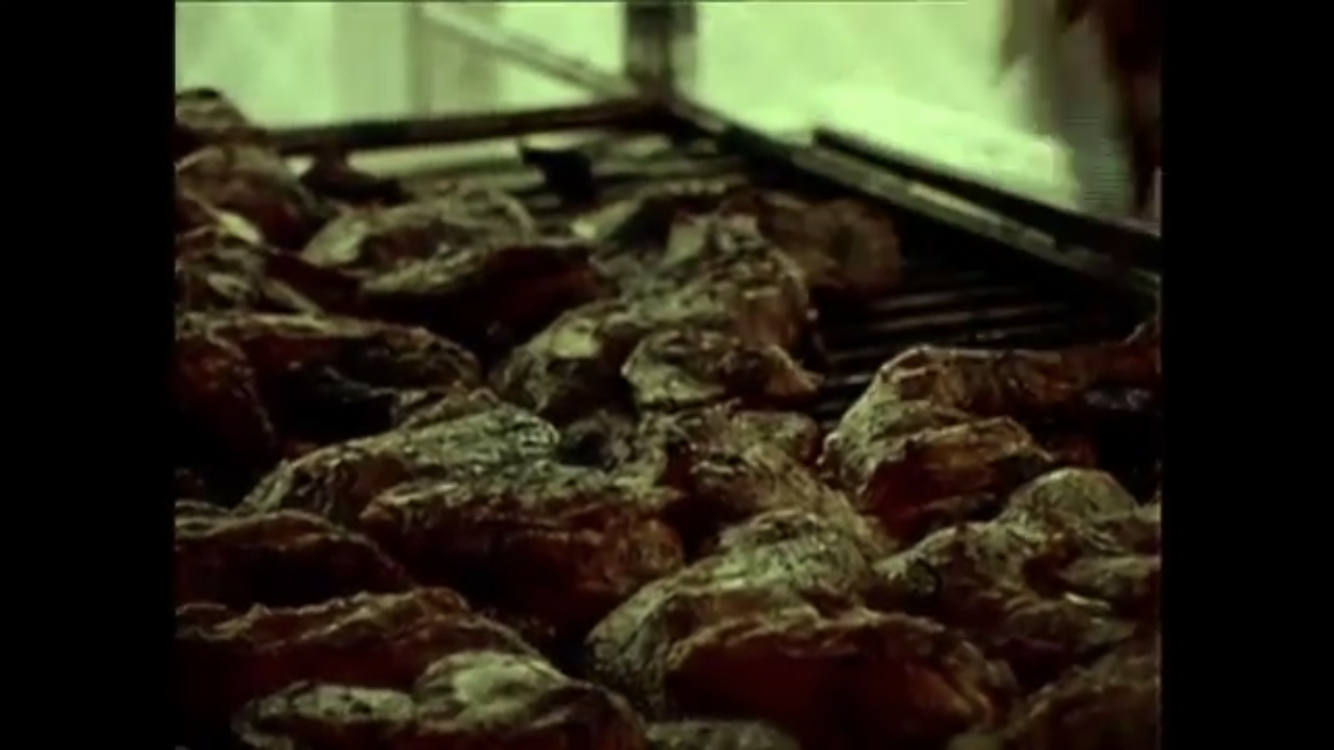 A once neutral, carnifectal adjective raised in ulterior times to overwhelming ideological category.

Slicing off the fatty bits. Reducing.

Shorthand for the entire superficialstructure of health, athleticism, sports, body image. A class status symbol hiding behind the false objectivity of nutritional science.

An extended metaphor for business efficiency, but especially parasitic managerialism and rigorous austerity against the lowest strata of the working class. Explicitly invoked in connection with Japanese auto manufacturers and “just-in-time” delivery. The elimination of “muda” (waste) compared to excess fat.

On the other plate…

Will called it chicken fat. Why ‘chicken fat’? In the historical survey, Mad Art, Mark Evanier writes, “Just what that means is a good question, but it probably means something ridiculous.”-Will Elder: The Mad Playboy of Art

Chicken fat is delicious, and also, a shorthand term coined by Will Elder for the obtrusive business and over-gagging present in classic screwball comics. Jewish working class flavouring.

Chicken fat is the stuff that oversaturates reality, transforms it, flavours it. The discarded cartooning concept that can be weaponized against the latest fads of capitalist culture.

For dirty bibs and fingerstains. It’s the engorged deliria of the Fourierist gourmand that will elevate us above the lame neutrality and purchased slimness of the one percent fatters.

There is an unconscious tendency to want to “trim down” which must be smothered in fat and drowned. Not against health, but for a real health, against faux-asceticism.

Tinker with what you’re supposed to leave alone. Avoid creative solutions. Resolve problems that have already been figured out. Get distracted by alleyways and stray cats and hat puns. 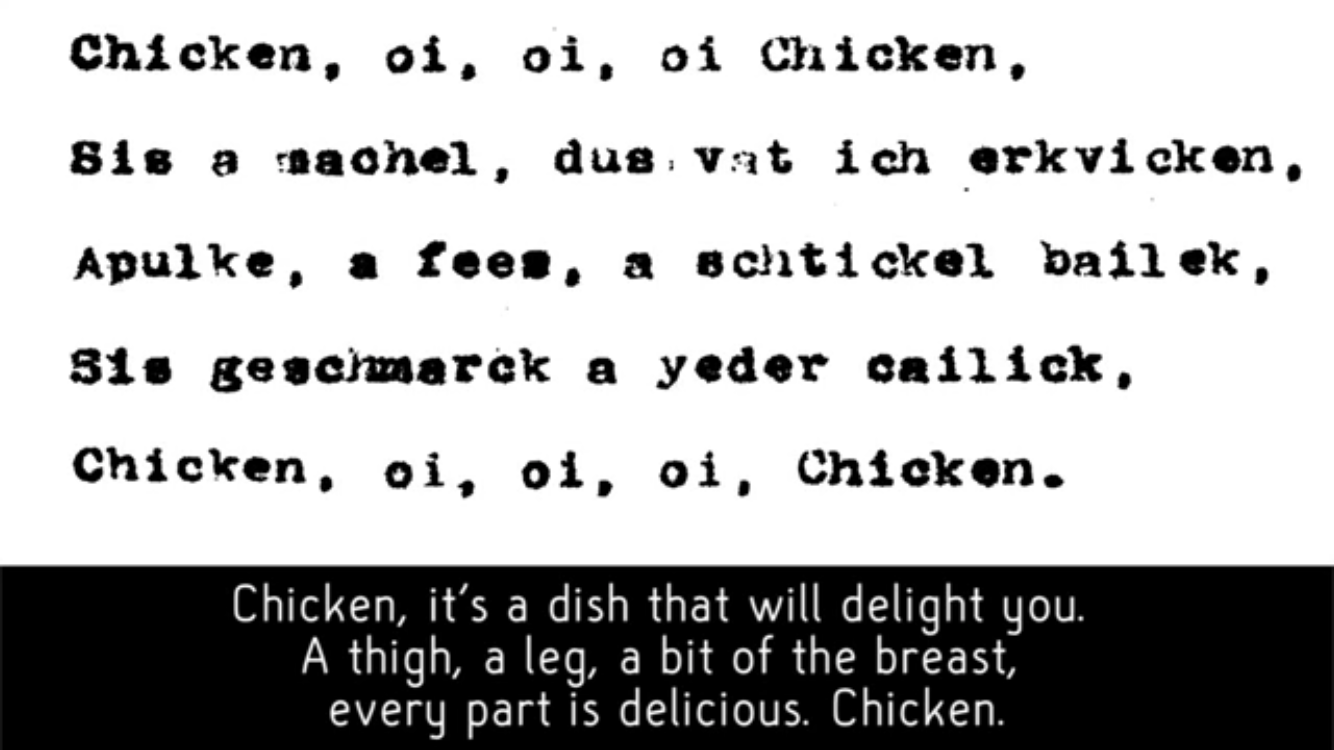 The cunning negation of an egg-salad sandwich.

An Apotropaic Device for Smuggling on the Solstice—Luck (A) reaches for (B) a protuberance under the watchful gaze of (C) prohibition.